Rolling Valley Elementary School opened on September 5, 1967, with 410 students and 14 teachers. Our building was formally dedicated on January 23, 1968. By the spring of 1968, there were more than 610 students and 21 teachers at Rolling Valley. Our first principal, Arthur R. Mitchell, once stated that four to five new students enrolled every week!

Rolling Valley Elementary School was designed by the architecture firm of Saunders & Pearson, and was built by E. H. Glover, Inc. at a cost $522,800. Originally, Rolling Valley was built for a capacity 660 students. Our school had 24 classrooms, a library, administrative offices, a health clinic, a teachers' lounge, a kitchen, and a multi-purpose room.

Did you know that during the first year Rolling Valley was open there were no kindergarteners in our school? A kindergarten program was piloted in several schools in 1967 and proved so successful that one year later FCPS implemented kindergarten county-wide. FCPS enrolled approximately 8,000 children in kindergarten in September 1968.

In 1966, during the architectural design process for our school, Rolling Valley was referred to as Homewood Elementary School. Our building was officially named Rolling Valley by the Fairfax County School Board in December 1966. Learn why that name was chosen in this video produced for Fairfax County Public Schools’ cable television channel Red Apple 21.

The period between 1975 and 1985 was a challenging time for Fairfax County Public Schools (FCPS). Student enrollment gradually declined during this decade resulting in the closure of several schools in the eastern part of Fairfax County. The closures affected neighborhoods that saw the earliest growth post-World War II. The children in these neighborhoods were graduating high school, and there were fewer families in the area with young children. Enrollment at Rolling Valley fluctuated, but our school was not in danger of closure. In 1979, 629 students were enrolled at Rolling Valley. By 1983, that number had fallen to 394. Boundary changes and the development of new housing subdivisions in the West Springfield area caused the student population to rise again by the late 1980s.

During the 1960s there was very little funding available for school construction, so Rolling Valley was built without a gymnasium or music room. These rooms were built in 1986, when Rolling Valley received its first addition. Prior to this time, physical education was taught by classroom teachers in their rooms, and later by physical education teachers in the multi-purpose room and outdoors through structured play.

In 1989, a 10-classroom addition was built by E. H. Glover, Inc. at a cost of $1.4 million. The first building-wide renewal of our school was constructed from 1996 to 1998 at a cost of $3.6 million. A new classroom wing was added, the library was renovated, and air conditioning was installed throughout the building. After the renovation was complete, our building was rededicated during our 30th anniversary celebration on May 30, 1998. 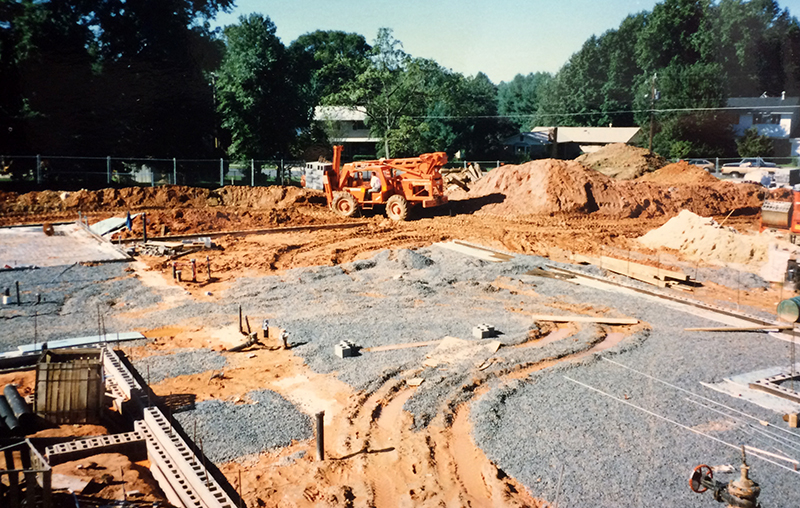 Did you know that Rolling Valley's first mascot was a giant? We have no artwork or photographs of this mascot, but alumna Karen Drain recalls that the giant was a large man with a club in his hand. There were trees at his feet to give a sense of his cartoonish size. Our second mascot was a unicorn. The first appearance of the unicorn in our yearbooks was in 1982. In 1993, our mascot changed to the rockets. On the occasion of our school's 30th anniversary celebration, in May 1998, then Principal Mary M. Dill stated, "When we chose the rocket we thought about soaring into the 21st century. We are rocketing into the future... but we do want to remember the past because when you remember your past it helps you build on the future." Rolling Valley's current mascot, the Rockin’ Robin, came into use in 1999.